This was concluded at a recent conference held by the Vietnam Pangasius Association (VPA) to review the results of the one year of the implementation of Government Decree No. 36. Representatives from management agencies and enterprises in the Mekong Delta attended the event.

Decree No. 36 on farming, processing and exporting Tra fish products took effect on June 20, 2014, aiming to improve Tra fish quality and build a brand name for the national strategic product. In particular, priorities are given to the planning, the identification and granting of code numbers for Tra fish farms, the registration of export contracts, and the application of the VietGAP standards.

To date, only a handful of provinces, including An Giang and Soc Trang have approved their specific planning for Tra fish farms while the remaining Tra fish farming provinces have not detailed the planning. Dong Thap province, home to the largest Tra fish breeding area in the Mekong Delta, expects to approve the detailed zoning in June this year whilst Can Tho city and Hau Giang province have just set their hand to the work.

The verification and granting of code numbers for Tra fish farms are delayed as no detailed planning is devised. Therefore, localities have promoted the registration of commercial Tra fish farming for their farmers in order to evaluate the output. Many Tra fish breeders in Dong Thap and An Giang provinces have not yet approached the registration.

The planning, the commercial Tra fish registration, and the code granting are the basic requirements processors and exporters must meet when making the registration of export contracts with the VPA. From June 1, 2105 onwards, the export contract registration will still be implemented as before because the requirements are not fully met, thus having no significant impact on the restructuring of the Tra fish sector and the improvement of product quality.

According to local officials, the compulsory application of the VietGAP standards as from December 31, 2015, which was prescribed in the Decree, made it hard for all Tra fish farms to comply. Dong Thap province now has the largest Tra fish farming area in the Mekong Delta under the VietGAP standards, with a total of more than 560 ha. Meanwhile, An Giang province is piloting the VietGAP application and Hau Giang province is appraising the funding of about VND 4 billion for the same work.

The biggest difficulty in expanding the application of the VietGAP standards is how to change stakeholders’ mind on the work, said VPA Vice Chairman Vo Hung Dung. He noted it is unusual to refuse to practise VietGAP standards which help confirm the quality of Tra fish products. It is not true that Tra fish raised under the VietGAP model will be appreciated but accepted by markets, and the new perception is that no VietGAP no purchase.

VPA Vice Chairman Dung also said that Tra fish firms are facing expanding inventory because of the sluggish exports. He explained that the deferment of implementing Decree No. 36’s regulations on moisture content and glazing rate created no positive signs for the market. The decree defines that the maximum moisture content of Tra fish products is 83% while the glazing rate is 10%. The application of the rules was scheduled to start on January 1, 2015 but it was put off till June 1, 2016 at the proposal of many businesses. Many  attendees agreed that the deferment had not been able to help the Tra fish sector escape from the crisis. Meanwhile, consumers remain skeptical of Tra fish products as no quality improvements have been made.

Nguyen Thi Thanh Binh, a Vietnamese representative at the US-based non-profit organization Global Aquaculture Alliance (GAA), said the US and the EU consumers commented the content of water in Vietnam’s Tra fish products is too high. She added her patrons complained that the pieces of Tra fish they bought in the past shrank less than those of today when cooked.

VPA Vice Chairman Ho Van Vang said domestic processing and exporting enterprises now live up to 75% of their total demand for raw materials, while the remaining 25 percent is satisfied by farmers. Vang asserted that material Tra fish provided by farmers must undergo very strict control by processing enterprises, so if the quality of Tra fish products is poor and disparaged by consumers, these businesses are to blame.

Chairman of the An Giang Fisheries Association Le Chi Binh explained that if poor-quality Tra fish are still bought by factories, there must be some problem with the input purchase.

Head of the Dong Thap Sub-department of Fisheries Le Hoang Vu said enterprises reacted to moisture content and glazing regulations as they had believed that they were really forced to comply with the rules. Hence, the enhancement of transparency and support is an urgent need. The Vietnamese representative at the GAA said that the non-profit organization agreed to fund a project designed to help Vietnam improve shrimp quality but it did not approve a similar project for Tra fish due to a lack of transparency. The EU market demanded that the net weight of Tra fish products (the total weight of Tra fish fillets after the glazing layer is removed) must be printed clearly on the label with certificates of shipments enclosed.

Deputy Director of the An Giang provincial Department of Agriculture and Rural Development Doan Ngoc Pha said if the quality of Tra fish products is confirmed to serve the export, businesses can sell them to any overseas market. He also suggested the Government set forth policies to support high-quality products under Decree No. 36. Nguyen Anh Khoa, a representative of the Vietnam General Department of Fisheries, said his agency is on the track to enhance product transparency and support high-quality products so as to build a national brand name for Tra fish. 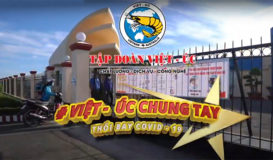 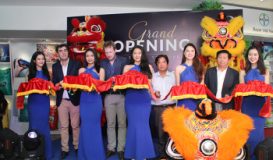 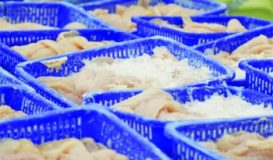 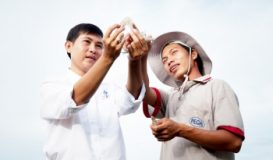 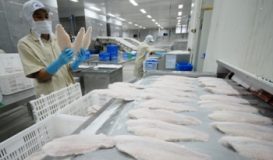 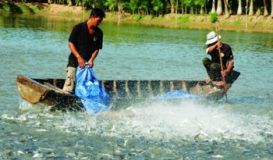 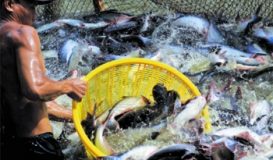